Chances are, you’ll either be looking at these photos in appreciation of Lee’s PS13 or shaking your head in confusion, wondering what all the fuss is about. If the latter applies to you, then please bear with me while I try to explain how this Nissan’s character makes it a truly fascinating vehicle. It might not have a 1000bhp 2JZ, 265 wide tyres or a radiator in the boot but, unlike those competition-bred vehicles, this S-body has something much more important; it has soul. Drifting is quickly becoming less about style and expression and more a calculated horsepower and traction race. However, at the other end of the spectrum, you’ll find those for whom power and grip fall by the wayside in favour of passion for the roots of the sport that we love. Drifting as a whole may be rising in popularity across Europe but this group of people with an appreciation for the Japanese forefathers that spent their weekends pioneering the art of drifting in the mountains remains a minority. Speaking as someone who would describe themselves as being a part of this minority, you can probably understand why I was extremely excited to stumble across Lee and his PS13 when I visited Huxley Motorsport a few nights ago. It’s always a great feeling to talk with someone who shares your views and appreciates the same smaller details that many wouldn’t even look at twice. Who knows how many people would have torn this Mt. Tsukuba sticker off as soon as their car had been unloaded from the boat (simply because it looks old and worn out) with no thought as to how it came to be on the car and what it represents. It’s this fascination with a car’s history that makes importing them so interesting for people such as Lee. Who knows how many late night runs to the mountains this interior has lay witness to, the driver sat snugly in the Bride bucket seat, basking in the soft green glow from the 60mm GReddy gauges mounted in the centre console. Heading back towards the city from the mountains as the sun rises in the distance – it’s fascinating to think of the memorable drives that this Nissan and its passengers have enjoyed. So few people seem to remember that drifting originated in cars that were, essentially, daily drivers. There are so many drifters that appear confused by the idea of it being possible to have both a fun track car and a car that can be enjoyed regularly on the roads, stripping their vehicles of any creature comforts and other OEM features that make frequent use more pleasant. It’s entirely possible to fit aftermarket parts such as a bigger turbo, intercooler and aluminium radiator without tearing your engine bay to pieces. 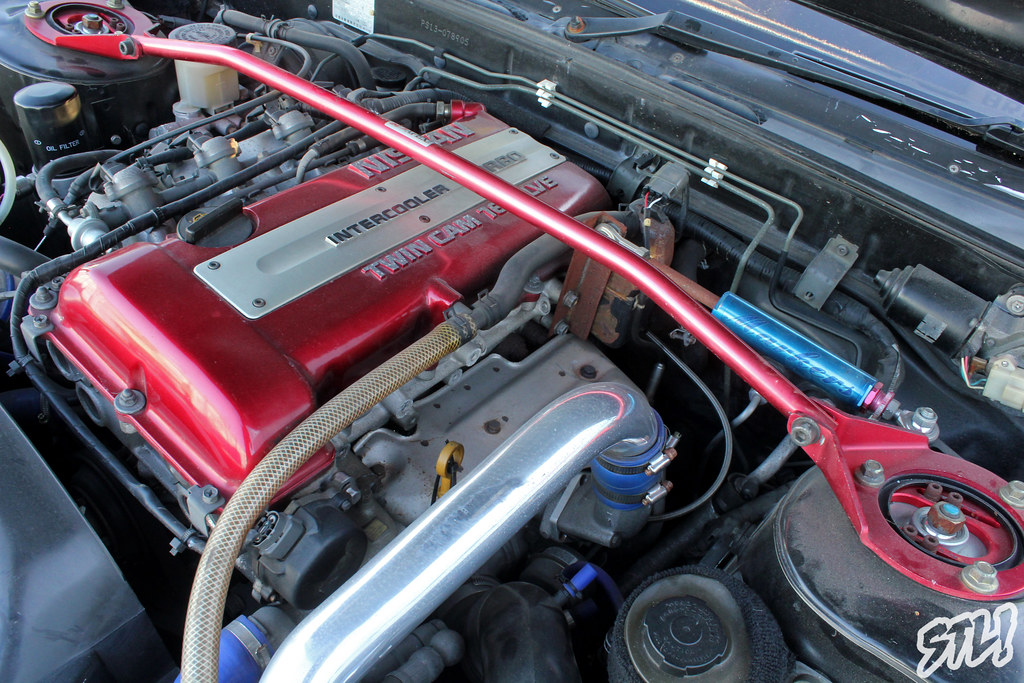 With a little forethought, necessary upgrades can be fitted that work in harmony with your factory parts. When was the last time you saw a Nissan drift car with fully functioning air conditioning still remaining? If it’s not broken, why even bother removing it? It’d be impossible to talk about Lee’s Silvia without drawing some attention to the incredible SSR Mk3 wheels that it’s sitting on. An S-body with classic Japanese 15″ wheels is the epitome of drifting’s roots in the 1990s and to me they are the icing on the cake for what is an already brilliant car. I’ve deliberately tried to avoid reeling off a spec list as I feel that doing so is not really what Lee nor his PS13 are about. However, as I’m sure I’ll be inundated with emails and messages asking about the wheel specs, I will tell you that the front pair measure 15×9.5 -20, while the rears are an even wilder 15×11 -25. It’s cars like this serve to remind some of us that what we indulge in is a creative passion for style and expression through our cars. Anyone can spend a lot of money and build a car using parts that will give them the most power, the most grip and the most lock, but will that car have any soul? I highly doubt it.