With running examples available for just a few hundred pounds these days, it’s a real shame the Mazda Rx-8 was only available with two fairly lacklustre engines while sporting looks that weren’t a patch on the FD3S Rx-7 that came before it. Even engine transplants haven’t been all that common in them when compared to other cars, such as the GT86 platform. Some argue that this is due to complications with the front subframe and space within the engine bay that is used to housing a relatively small rotary unit, while others say otherwise. 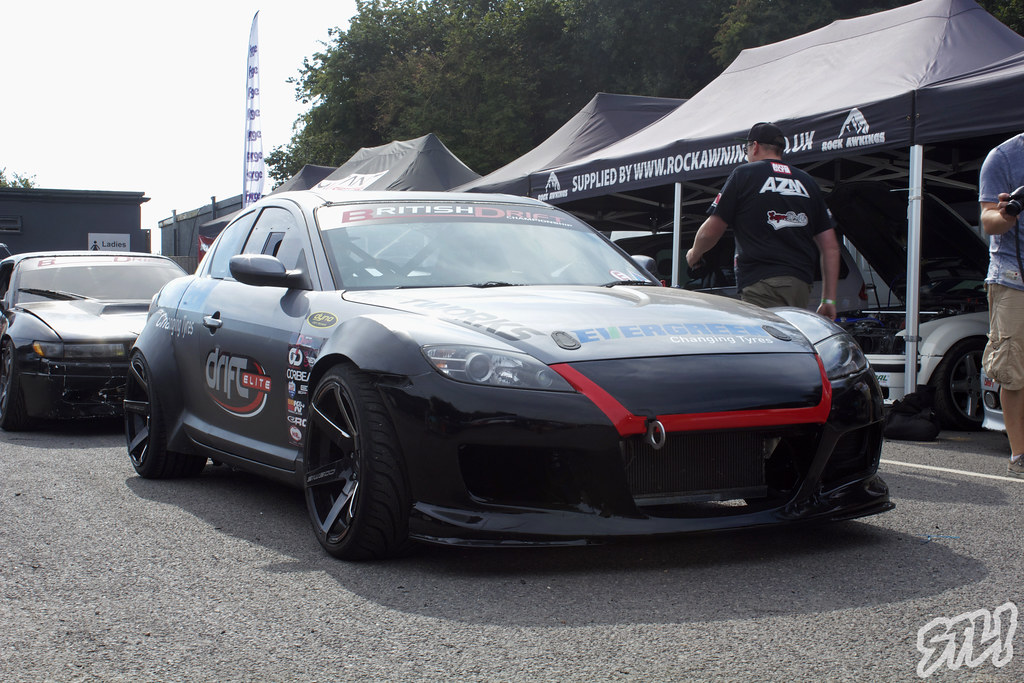 One shop that has persevered with the SE3P chassis is DynoTorque, builders of the infamous DW86 and conveniently located next door to Driftworks. Headed by resident lunatic Craig Taylor, DynoTorque has churned out numerous wild creations over the years, the vast majority of them having one thing in common: a V8 powerplant. 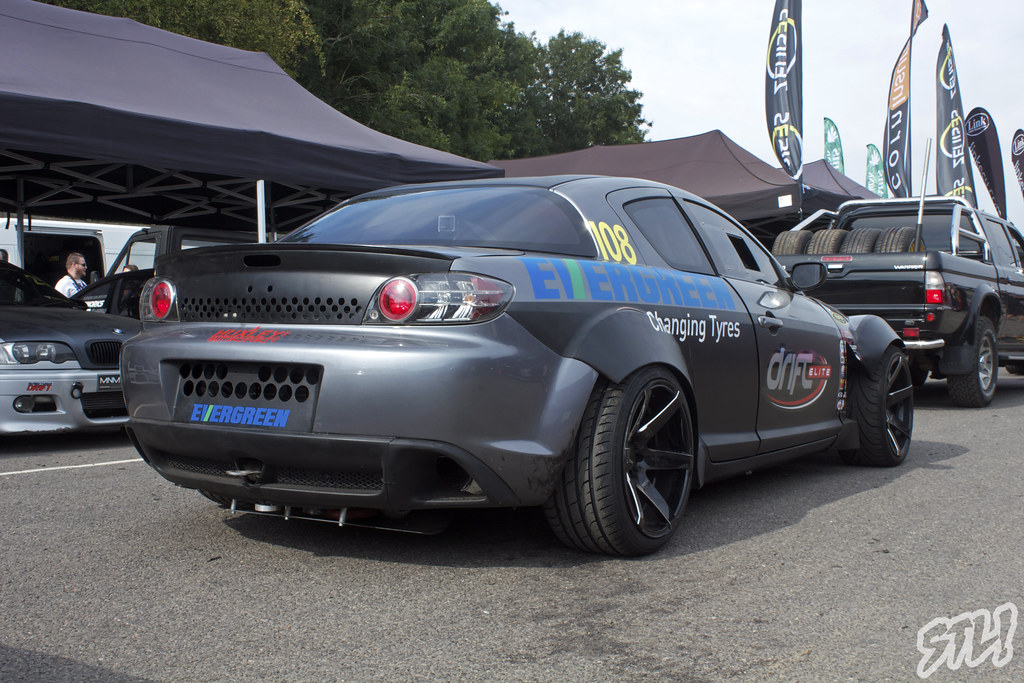 Craig is well known within the Mazda scene for saving Rx-7s and Rx-8s that would otherwise be destined for the scrap heap, removing the usually dead rotary units and replacing them with LS V8 units. While many purists see this as sacrilege (and I’m sort of on the fence about it), if it stops these cars being crushed then I can totally understand the reasoning behind it. 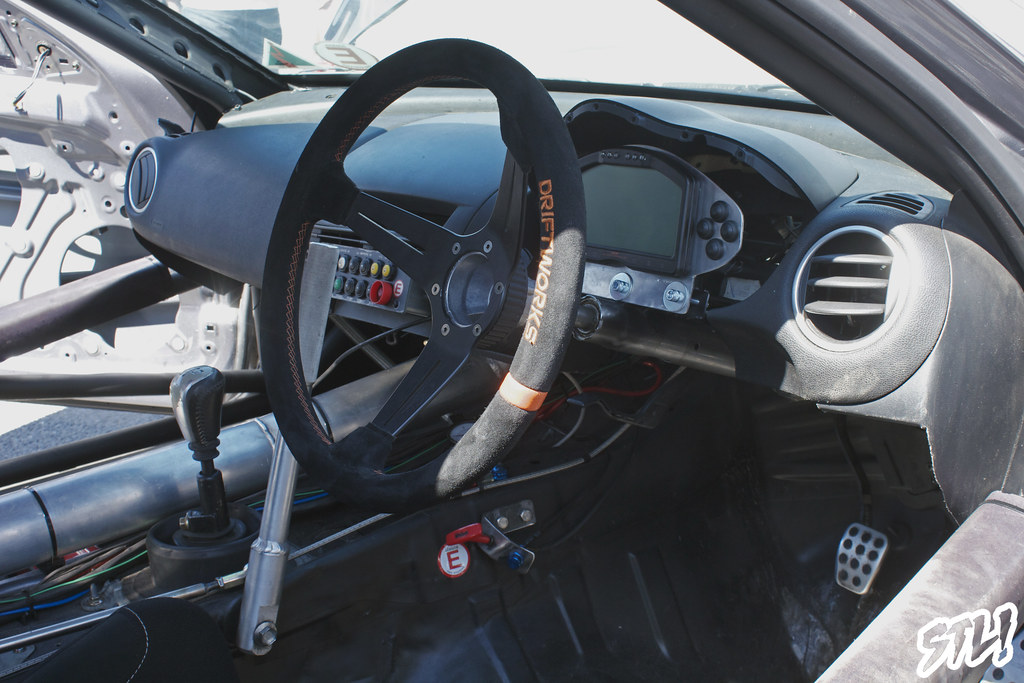 Matt Denham is a BDC competitor who joined the championship not too long ago, originally campaigning an SR20 powered S13. After some decent success in the Semi-Pro championship last year, Matt wanted to up his game for 2015 now that he has the backing of Evergreen Tyres, as well as promoting his “Drift Elite” drift school venture. Enter Craig, DynoTorque and, eventually, the LS2 V8 and rear-mounted turbo powered Rx-8 you see in these pictures. 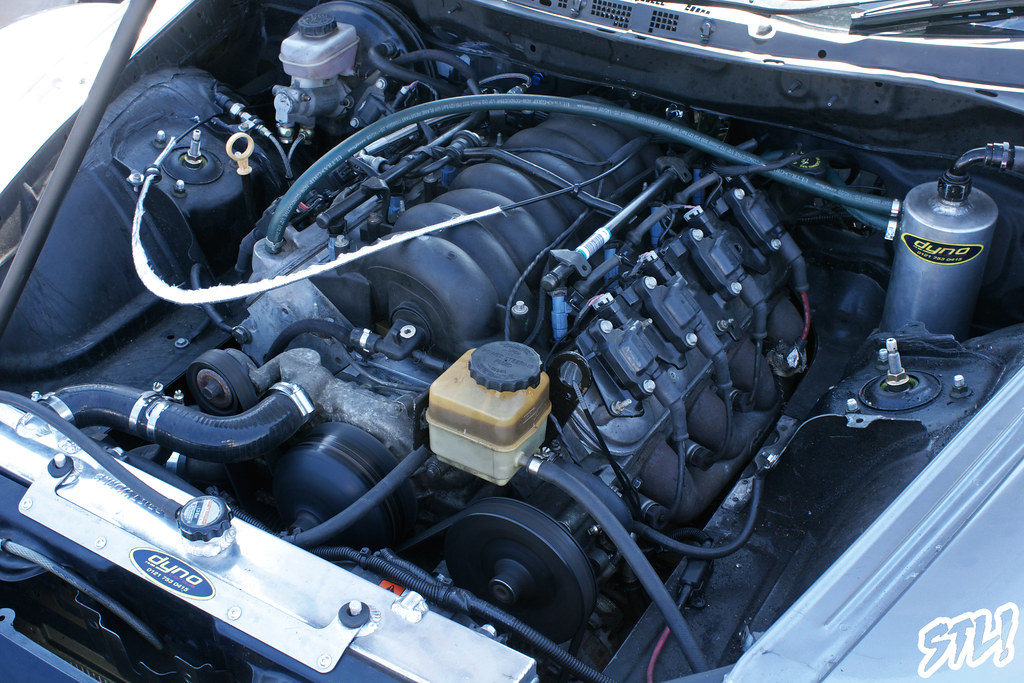 To answer the obvious question: does it work? Yes, yes it does. Take a look at the on-board footage below of Matt battling current Semi-Pro champion Matt Stevenson in his LS powered E92 – this was the first time the car has been driven in a competition environment (it’s also worth noting that Matt’s car is the first Rx-8 to compete in the BDC).

For those wondering where the turbo pipework is hidden, the rather large intercooler pipe running through the centre of the car gives the game away. 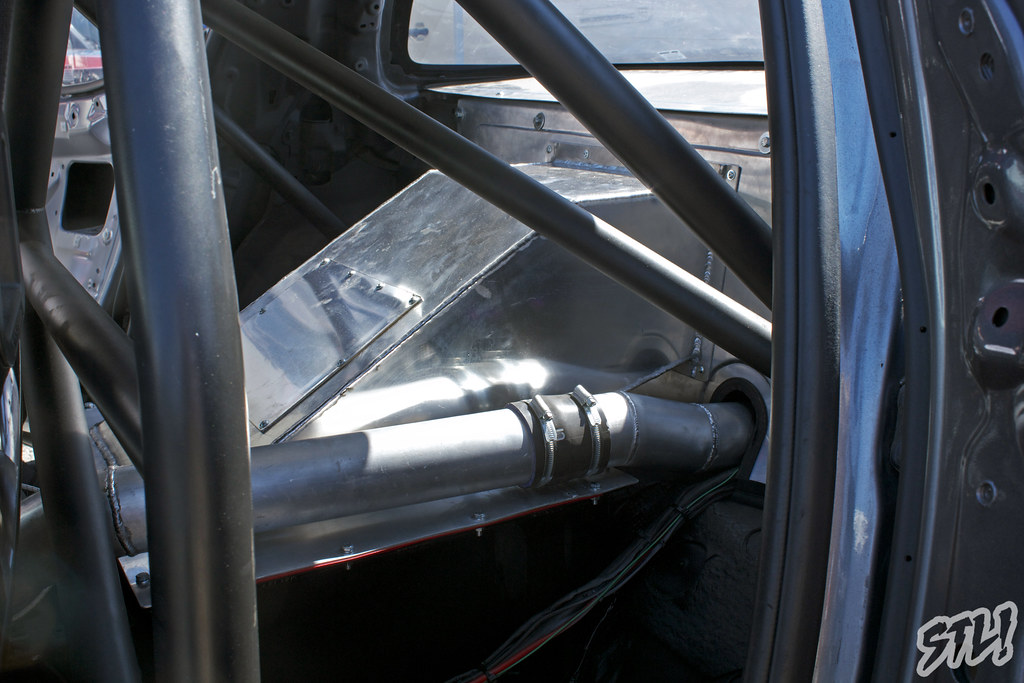 The turbo is tucked away very low down at the back of the car – the best picture I could get without jacking the car up was this one I grabbed while lying on the floor. Also out of sight was the BMW E9x rear subframe setup that the car is running, as the standard SE3P arrangement is far from capable of handling much more than the standard power 230bhp power ouput. 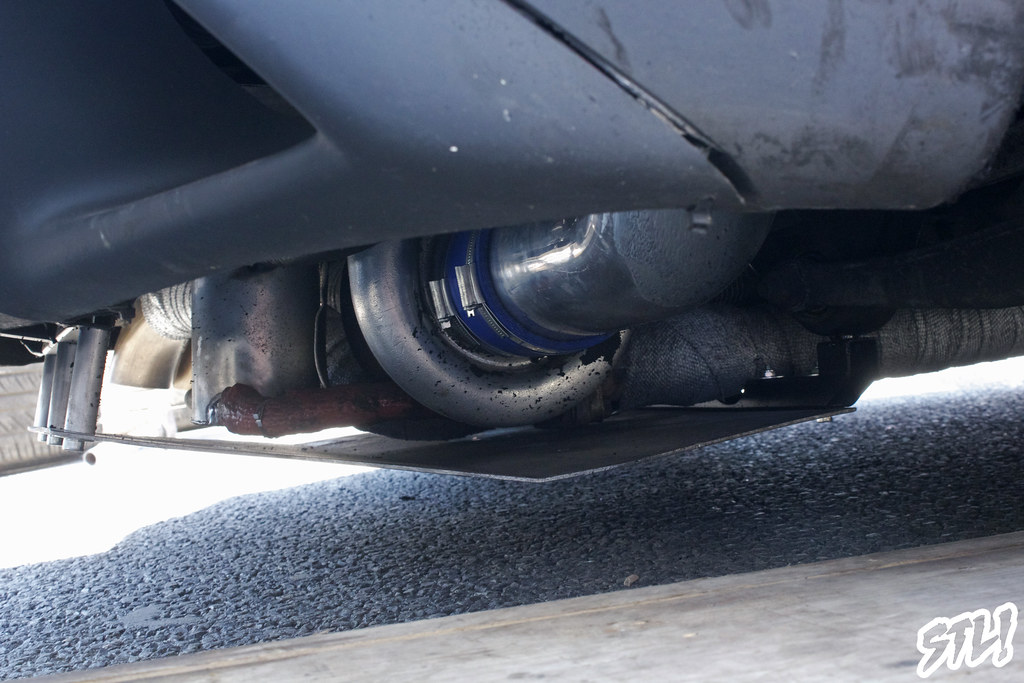 Here’s the view of the boot from above. 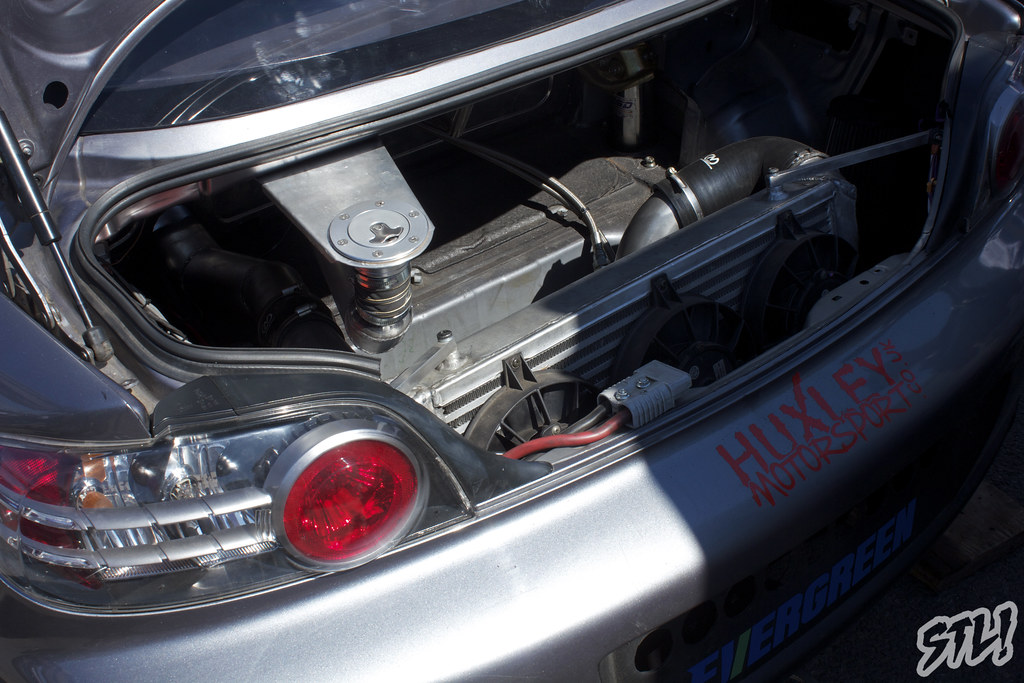 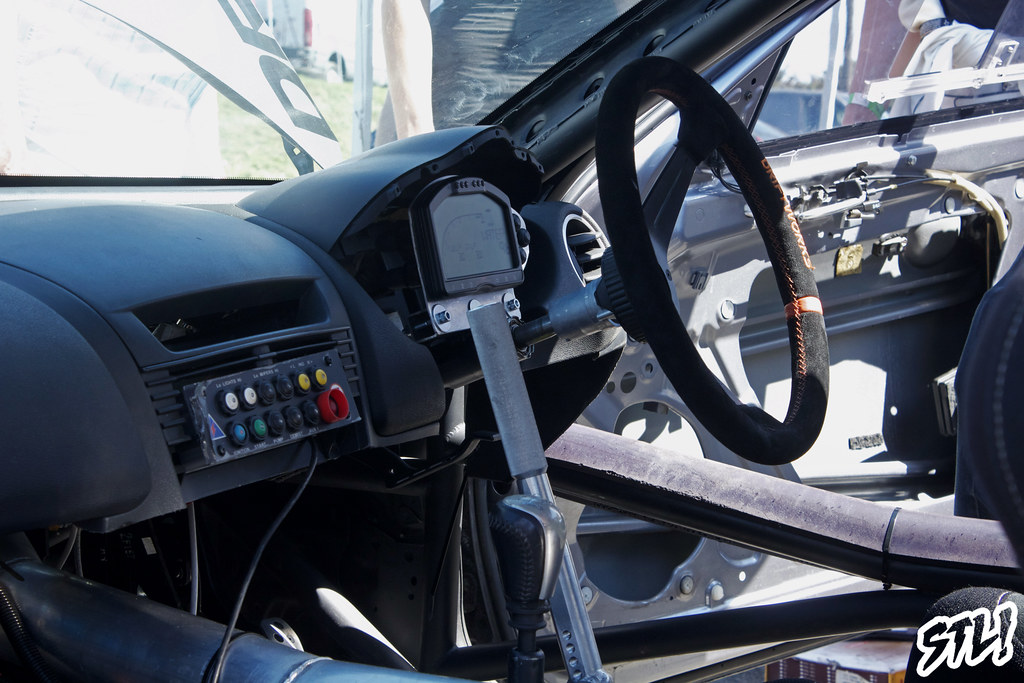 There’s no denying that the small rear doors are a pretty unique touch on a purpose built track car, especially when they open up to reveal more of the roll cage. 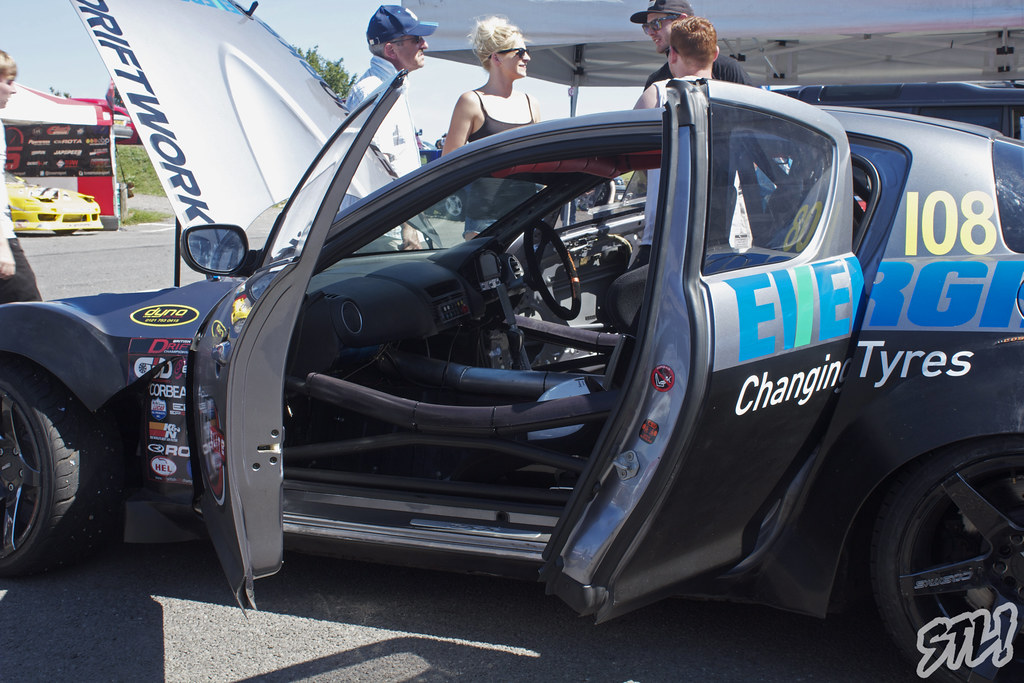 While Rx-8s are hardly an off-the-shelf, ready to thrash drift car, the low initial purchase cost of them is surely going to become very attractive during this period of time where the traditional Nissan and BMW platforms rocket in value, yet newer chassis such as the GT-86 still remain too expensive for the average grassroots drifter. Matt’s car may be far from standard, but it’s proof that the potential is there when used in conjunction with a competitive engine package. If it’s not the Rx-8, my money is on the Z33 350Z becoming the next grassroots drifter of choice. We’ll probably find out over the next few years.